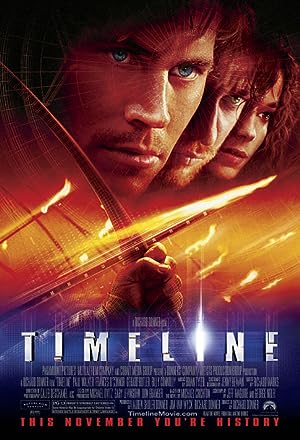 Timeline (2003)
116 min|Action, Adventure, Sci-Fi, War|26 Nov 2003
5.6Rating: 5.6 / 10 from 58,433 users
A group of archaeologists become trapped in the past when they go there to retrieve a friend. The group must survive in fourteenth century France before they can escape back to the twenty-first century.
Director: Richard Donner
Creator: Michael Crichton (novel), Jeff Maguire (screenplay), George Nolfi (screenplay)
Actors: Paul Walker, Frances O'Connor, Gerard Butler, Billy Connolly

A group of archaeologists and combat experts led by Chris Johnston (Paul Walker) and Kate Ericson (Frances O’Connor) use a “3-D fax machine” to time-travel back to France in 1357, in hopes of retrieving Chris’ father, Professor Edward Johnston (Sir Billy Connolly), and returning safely to the present. No such luck. Fending for themselves against marauding hordes of medieval French warriors at war with the invading British, these semi-intrepid travellers find their body count rising, and the deadline for their return home is rapidly approaching.